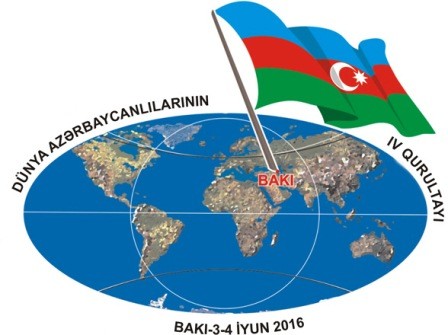 IV Congress of World Azerbaijanis will be held in Baku on June 3-4.

The State Committee on Work with Diaspora of Azerbaijan Republic informed about this.

According to the report, the organizing committee has been established under the State Committee on Work with Diaspora for preparation of the IV Congress of World Azerbaijanis.


At the congress more than 500 representatives the Azerbaijani Diaspora organizations from 49 countries of the world, as well as foreign politicians, public figures and scientists known for the friendly attitude to Azerbaijan consisting of 50 guests are expected to attend.

During the congress, the work done since the 3rd Congress of World Azerbaijanis will be discussed. The participants will then exchange their views on duties lying ahead as to informing the world community of Azerbaijani realities, use of modern methods and information technologies in raising awareness, current problems relating to protection of Azerbaijanis’ rights and freedoms, and possible solutions to these problems, youth’s involvement in diaspora work, lobby-building and other issues.

Debates on the aforementioned issues as well as meeting with representatives of concerned state agencies of Azerbaijan will also be held on the sidelines of the congress.

The congress will come to an end with the adoption of several documents.