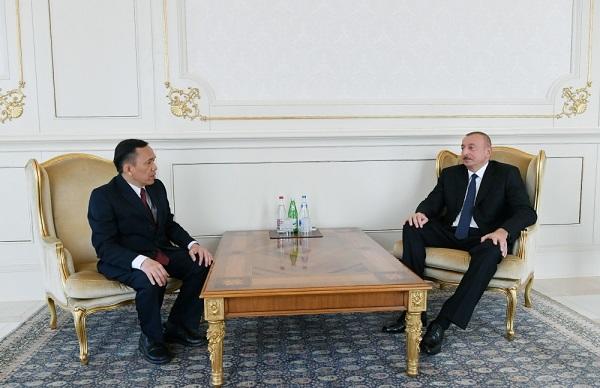 President of the Republic of Azerbaijan Ilham Aliyev has received the credentials of the newly appointed Ambassador Extraordinary and Plenipotentiary of the Lao People's Democratic Republic Siviengphet Phetvorasack.

President Ilham Aliyev then spoke with the ambassador.

The head of state stressed the importance of expanding the bilateral relations and defining specific areas of cooperation. Emphasizing the significance of reciprocal visits at different levels, President Ilham Aliyev said that these trips featured fruitful discussions on the development of the bilateral ties.

Ambassador Siviengphet Phetvorasack extended the Laotian leadership`s greetings to the head of state. Siviengphet Phetvorasack noted that the government and people of Laos highly appreciated Azerbaijan`s support for the development of the bilateral relations. The ambassador underlined that reciprocal visits at different levels contributed to the development of the bilateral ties. He pointed out that the relations were developing successfully on various fronts, and expressed confidence that based on good traditions, the bilateral ties would continue to expand.

The head of state thanked for the greetings of the leadership of Laos and asked Siviengphet Phetvorasack to extend his greetings to the Laotian leadership.

They exchanged views on prospects for cooperation between the two countries in economic, trade, humanitarian, tourism and other areas.