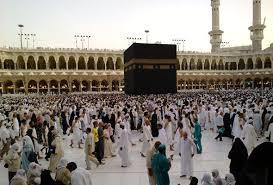 Two million Muslims gathered at Saudi Arabia’s Mount Arafat on Saturday amid the summer heat and regional tensions for a vigil to atone for their sins and seek God’s forgiveness as part of the annual haj pilgrimage.

Axar.az reports citing foreign media that Pilgrims clad in white robes signifying a state of purity spent the night in a sprawling encampment around the hill where Islam holds that God tested Abraham’s faith by commanding him to sacrifice his son Ismail. It is also where Prophet Mohammad gave his last sermon.

Saudi Arabia has said more than two million pilgrims, mostly from abroad, have arrived for the five-day ritual, a religious duty once in a lifetime for every able-bodied Muslim who can afford the journey.

For others, the pilgrimage is a form of relief. Egyptian merchant Ramadan al-Jeedi said he was grateful to accompany his mother after his father died last year.