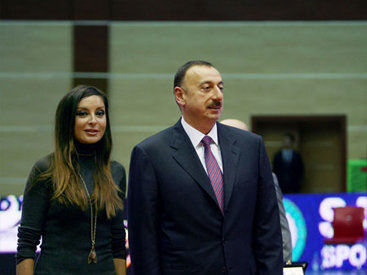 The opening ceremony of the 37th Rhythmic Gymnastics World Championships is taking place on September 16 at the National Gymnastics Arena in Baku.

President of the All-Russian Federation of Rhythmic Gymnastics Irina Viner-Usmanova is also inaugurated.

At the ceremony, the state flags of the participating countries were presented first.

Then the Minister of Youth and Sports of Azerbaijan Azad Rahimov and President of the International Gymnastics Federation Morinari Watanabe made a speech.

Former President of the International Gymnastics Federation, Bruno Grandi, who died last week, was commemorated with a minute's silence.