IAPH conference to be held 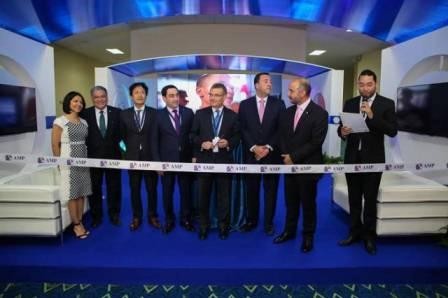 A delegation from the Baku International Sea Trade Port CJSC was active during the annual conference of the International Association of Ports and Harbors (IAPH) that was held in Panama from 10-13 May 2016.

The IAPH has more than 300 member from 88 countries and Port of Baku has been a full member since 2010. During the conference the IAPH’s Board of Directors unanimously decided to hold the mid-term annual conference in Baku in 2018.

Mr. Susumu Naruse, Secretary General of IAPH, said that the Association was a wonderful forum for ports around the world to collaborate and share their experiences. He continued: “We are happy to have chosen Baku as host city for the 2018 mid-term conference and look forward to visiting Azerbaijan and seeing at firsthand the developments in and around the new Port of Baku.”

IAPH President Mr. Santiago Garcia Mila pointed to the significance of the decision to hold the IAPH conference for the first time ever in Azerbaijan and in a region of the world that has undergone such rapid economic growth: “I look forward with enthusiasm to the Mid-term Conference to be hosted in 2018 by the Port of Baku. I trust that delegates from across the world will also eagerly anticipate a visit to Port of Baku in 2018 and seeing for themselves its role as the transit and logistics hub for Eurasia."

Taleh Ziyadov, Director-General of Port of Baku, highlighted the importance of the Association’s selection of Baku: “Hosting the IAPH annual mid-term conference in 2018 will be a major opportunity to promote our country and its development. We hope to welcome over 500 delegates from ports around the world to visit the country’s capital in 2018. Participants will become acquainted with the new Port of Baku and Free Trade Zone (FTZ) that is being developed around it and also learn about the history and culture of Azerbaijan,” he said.

The International Association of Ports and Harbors was established in 1955 and is headquartered in Tokyo, Japan. Its annual conferences feature discussions on important issues that include: port stability and security, the development of new port facilities, the impact of environmental change, information technologies and port operations. The 2015 annual conference was held in Hamburg, and Bali (Indonesia) is the venue for 2017.

On 17 March, President Ilham Aliyev signed a decree on the creation of the Free Trade Zone in and around Port of Baku at Alat. Sited at a strategic crossroads of Europe and Asia, with access to sizeable markets in China, Turkey, Iran and Russia, the new port and its FTZ will host the transport and logistics industry, a pharmaceutical cluster, common-use oil supply base facilities and zones for manufacturing, packaging, labelling and consolidation of goods.