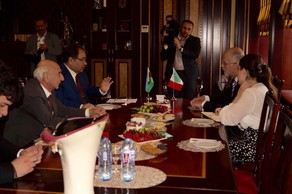 Ambassador of Mexico to Azerbaijan Rodrigo Labardini met with the rector of the Baku State University Abel Maharramov. It was informed at the embassy of Mexico.

The rector reported on the activity and structure of the university, its history and cooperation with foreign institutes of high education. It was emphasized that the university, which will celebrate its 100th anniversary, is the first institute of higher education to be founded in the country.

Ambassador Labardini, meanwhile, spoke about bilateral relations, the dynamics of development of ties as a result of the opening of the respective embassies of both countries. In addition, the diplomat stressed the similarities in national ancient cultures and its positive influence to mutual knowledge and approach.

The sides discussed the links between Baku State University and the Universidad Anahuac del Sur (Mexico) and opportunities for collaboration in various scientific fields.

They agreed that the promotion of relations between universities of both.