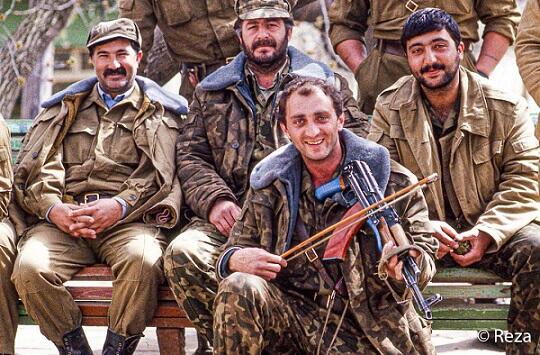 The world-famous French photographer of Azerbaijani origin spoke about the events he witnessed 29 years ago on the eve of the occupation of Shusha.

Axar.az reports that the photographer shared the photo he took in those days.

"Shusha, 1992. I was the last journalist to stay in Shusha and I had to leave shortly before the occupation of the city, which was besieged by Armenians with heavy equipment with the support of the Russian military.

For more than a month of covering the Karabakh war, I realized that Azerbaijan did not have a real professional army, and that a large number of volunteers, police and other civilians joined the war to protect Karabakh. Although the situation was very tense and the number of casualties was very high, I was amazed by the enthusiasm of the defenders who left their jobs and came from all over Azerbaijan.

One day I met this virtuoso violinist who brought his violin to the front. Although the instrument itself was destroyed by fire, he brought the bow with him and used it to play some melodies on the machine gun.

Azerbaijanis are mostly very good musicians. I returned to Paris to show photos of Karabakh to the world media, which turned a blind eye to one million refugees, martyrs, massacres and tragedies of Azerbaijanis," Deghati said.