The Defense Ministry made a film about Khojaly (Video) 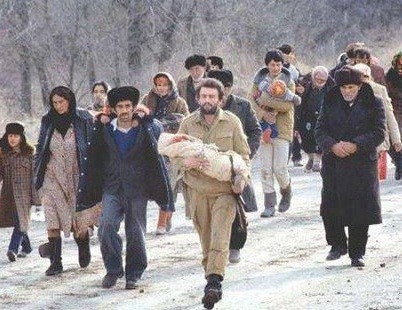 Educational Films Studio of the Defense Ministry has presented the documentary film dedicated to the 24th anniversary of the Khojaly genocide.

The documentary film was focused on the ancient history of Khojaly, archaeological excavations there and the period from siege of the city on November 1991 to the commit of genocide.

The residents of Khojaly said about tragedies that were committed by Armenian forces and the armed forces of Russian 366th regiment.

In addition, from evening of February 25 to 26, 1992, the Armenian armed forces attacked the town of Khojaly with the support of armored vehicles and military personnel of the 366th Motorized Infantry Regiment. As a result of the bloody massacre 106 women, 63 children, 70 old men were killed. 8 families were completely annihilated, 130 children lost one parent, while 25 both lost both parents. 1,275 peace residents were taken hostages, while the fate of 150 of them is still unknown. 613 people were murdered, 487 were injured.