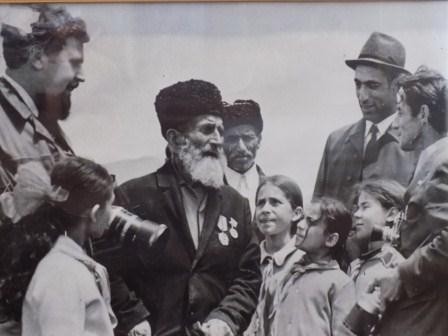 Is there such a thing as a longevity diet? Yes, as increasingly, studies suggest. But what makes these groups so fortunate?

Around the world, certain groups of people enjoy exceptionally long lives. Scientists have long been baffled as to why some people live so much longer than others. Science says that your diet, how much you exercise and your genes all play a role in determining how long you'll live.

According to official statistics, 838 people aged 100+ live in Azerbaijan, with the population of almost 10 million.

What about the life span, then the average life expectancy in the country has steadily increased and now it is 74 years (71 for men and 76 for women), according to official statistics.

Those who have lived to blow out 100 candles are frequently found in Azerbaijan, mostly in Lankaran, Masalli, Zagatala, Gusar, Gazakh, Tovuz, Ismayilli, Jalilabad, Shamakhi, Lachin, Kalbajar, and Aghdam regions.

But Lerik region, famous for its majestically high Talysh Mountains covered by forests, fast-flowing rivers and high waterfalls, has a unique feature -- the oldest shepherd in the planet Shirali Muslumov lived 168 years in these mountains.

The old shepherd was so cheerful and joyous, that in his 136 years, he was married for the third time, "young" 57-year-old Khatum-khanum. Interestingly, the marriage with Shirali had a positive impact on her life -- she lived to be 104 years old.

Gerontologists claim that one of the important contributors to longevity and healthy living in Lerik is its marvelous nature and people’s life-style.

About 42 percent of all residents of the planet, who have reached 100 years or more, accounted for the Caucasus region, triggering the researchers to study the case. It became clear that they live a long life not because they drink goat's milk, or special sort of wine, which slow down the aging process, and not because they eat cheese with nutrients that strengthen the walls of blood vessels. The most important is that they eat precisely those foods which their ancestors ate. Their body is adapted to these products for many centuries.

Lerik’s museum founded in 2010, is dedicated to the way of life of the region’s phenomenal people. Currently, the museum has 1,200 exhibits of up to 150 long-livers.

The region's resident, 91-year-old Dashdamir Pashayev, said that he worked as a policeman for a very long time. Last year the region solemnly celebrated his 90th anniversary.

Revealing his secret of longevity, Pashayev underlined the establishment of a happy family. He highlighted the importance of mutual understanding, patience, sincerity and love as the main tools for the happy family.

His lovely wife Tahira Pashayeva is 88 years old. “I owe my health to my wife,” he stressed.

Sohbet Farziyev, a 117-year-old resident of the village, is a relative of the oldest man of the planet Shirali Muslumov.

A disabled of the first category of the Great Patriotic War Farziyev has 20 children from his two wives and more than 100 grandchildren, and great grandchildren.

He sees the secret of his longevity in natural food and healthy lifestyle.

Life is a valuable gem given to a man by Almighty and yet no one knows when it ends. But no matter how long you live, live a healthy life and be surrounded with love!