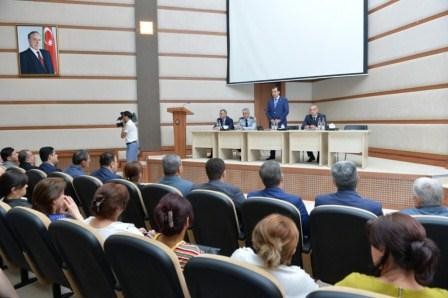 A workshop titled “State-religion relations” has been held at the Heydar Aliyev Center in Lankaran.

Head of Lankaran City Executive Authority Taleh Garashov said that founded by national leader Heydar Aliyev, Azerbaijan`s development strategy was successfully continued by President Ilham Aliyev. “Thanks to this strategy Azerbaijan has become one of the most civilized and tolerant countries in the world.”

He highlighted the Azerbaijani government`s policy to preserve and promote multicultural values. He said state-religion relations in the country, including in Lankaran, were regulated by the country`s laws. “Irrespective of his ethnical background, every citizen of Azerbaijan has his freedom of religion ensured by the Constitution,” he added.