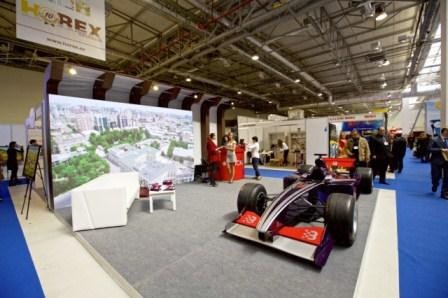 Baku City Circuit (BCC) has opened its stand at the Azerbaijan International Travel and Tourism Fair (AITF-2016), which is being held from 7-9 April at the Baku EXPO Centre.

More than 300 companies from 30 countries are participating in AITF-2016, organized by Iteca Caspian Company with the support of Azerbaijan’s Ministry of Culture and Tourism.

Participating in AITF for the first time, Baku City Circuit will present comprehensive information about the 2016 Formula 1 Grand Prix of Europe through video clips showcasing the track and city, as well as distributing detailed brochures about the upcoming race. Visitors will be able to purchase tickets to the fastest city race on the F1 calendar and get acquainted with a real race car.

Nigar Arpadarai, BCC Head of Marketing and Communications, invites visitors and residents of the capital to visit the unique stand dedicated to the Formula 1 Grand Prix of Europe. She said: "The interest among international audiences to the inaugural Formula 1 race in Azerbaijan is ever increasing and thousands of Formula 1 fans will soon arrive in Baku to explore our capital city and watch this spectacular sporting event live. We are excited to see that 65% of the tickets sold thus far have been purchased from abroad and we currently have customers from 25 countries around the world. At the same time, hotel bookings are on the rise and hotel occupancy rates for the race weekend have already exceeded 70%. We are confident that our participation in the International Travel and Tourism Fair will further increase public awareness about Baku City Circuit and the Formula 1 Grand Prix of Europe."