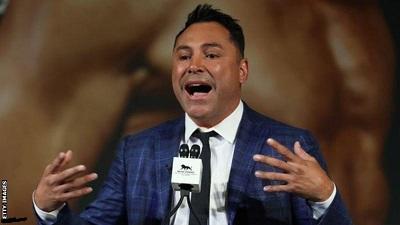 Former six-weight world champion Oscar De La Hoya has been accused of sexually assaulting a woman at his home in 2017.

The woman behind the allegations was 29 at the time and was in a "consensual sexual relationship" with De La Hoya.

The complaint has been made to a civil court and the unnamed woman is seeking damages from De La Hoya.

"Oscar is a very successful businessman, running one of the country's leading sports and entertainment companies - thus a prime target," the statement read.

"We vehemently deny these allegations and look forward to vigorously defending Oscar's good name and reputation."

Documents filed to the Superior Court of the State of California say Mexican-American De La Hoya invited his accuser to his Pasadena home.

The claim states the woman "believed they would engage in consensual sex" but his behaviour was "forceful" when she refused a sexual act.

The court documents claim his behaviour was "extreme, outrageous, and beyond all bounds of decency" and the woman "has suffered and continues to suffer constant and daily symptoms of depression, anxiety, and related symptoms associated with post-traumatic stress disorder."

De La Hoya held world titles across weight categories from 1994 to 2007 before announcing his retirement in 2009.

He founded promotional outfit Golden Boy Promotions in 2002 and was inducted into the International Boxing Hall of Fame in 2014.