Azeryol Baku secured a spot in the semi-finals 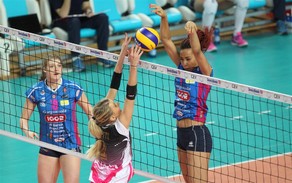 Azerbaijan's Azeryol Baku secured a spot in the semi-finals of the 2016 CEV Volleyball Cup – Women to play there 2015 gold medalists Dinamo Krasnodar of Russia.

The Italian national league runners-up came back strong after losing the first game in Baku two weeks ago (3-1). Igor Gorgonzola Novara responded to that setback with a solid performance to claim a 3-1 home victory paced by their Croatian opposite Samanta Fabris (33 points, 42% of success rate in attack). As for the team from Azerbaijan, Ukrainian-born Anna Stepaniuk was their best scorer recording 17 points on her own.

After a real fight which lasted for three sets, Novara took the lead 2-1 (25-23, 26-28, 25-23) while Azeryol Baku did not seem able to keep the pace set by the Italians in the fourth set, so the Igor girls could easily cruise to a comfortable 25-18 win to bring the game to a golden set.

Malika Kanthong's service made the difference in the first part of the crucial set with Azeryol leading 5-2, yet Novara could come back and got closer with Fabris' second ace in the game (9-8 for the Azeris). However, in the end Stepaniuk and Edina Dobi contributed three match balls for Azeryol (14-11) and Dobi finished the game a few seconds later (15-13) to shape up a much anticipated semi-final with titleholders Dinamo Krasnodar.