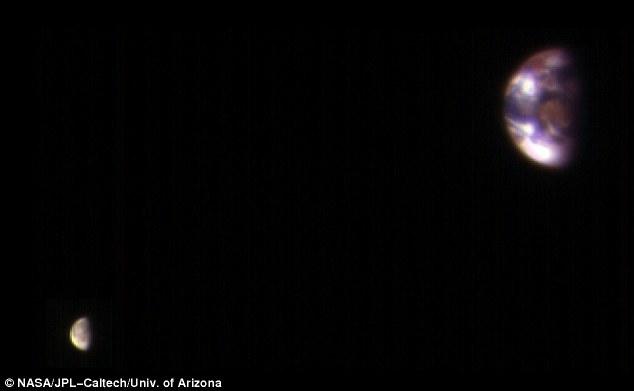 NASA has released this incredible composite image of Earth and its moon, as seen from Mars.

Axar.az reports that, it combines the best Earth image with the best moon image from four sets of images from on NASA's Mars Reconnaissance Orbiter.

NASA has released this incredible composite image of Earth and its moon, as seen from Mars by NASA's Mars Reconnaissance Orbiter.

The reddish feature in the middle of the Earth image is Australia. Southeast Asia appears as the reddish area (due to vegetation) near the top. Antarctica is the bright blob at bottom-left. Other bright areas are clouds.

When the component images were taken on Nov. 20, 2016 by the High Resolution Imaging Science Experiment (HiRISE) camera on NASA's Mars Reconnaissance Orbiter, Mars was about 127 million miles (205 million kilometers) from Earth.

Each was separately processed prior to combining them so that the moon is bright enough to see.
The moon is much darker than Earth and would barely be visible at the same brightness scale as Earth.
The combined view retains the correct sizes and positions of the two bodies relative to each other.
HiRISE takes images in three wavelength bands: infrared, red, and blue-green.