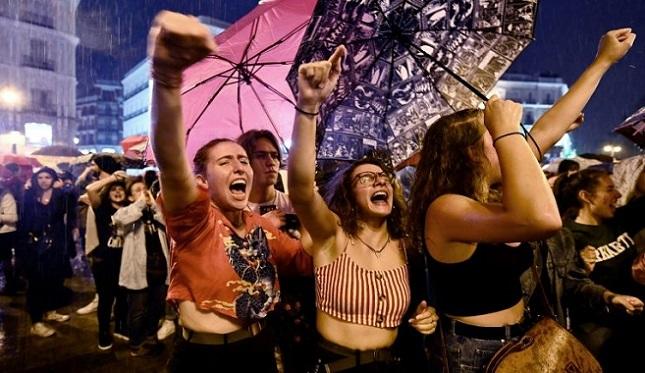 Thousands of protesters demonstrated against domestic violence in central Madrid on Friday. After a series of high-profile rape cases and 19 instances of women killed by their partner or ex-partners this summer, activists declared a "feminist emergency".

Axar.az reports citing EuroNews that thunderstorms did not deter protesters who called for the patriarchy to end, with chants such as "now that we're all together, now you see us". One sign had the slogan "what democracy are they talking about when they keep killing women and getting away with it?"

The government frequently publishes the number of women killed by partners or ex-partners. The number so far this year is 42 while 32 children have been orphaned as a result of domestic violence. Over 1,000 women have been killed since records started in 2003.

Relative to other countries Spain has a good track record for fighting domestic violence. Rates of reported partner violence in Spain are amongst the lowest in Europe and Spain ranked as the European Union country with the most visible campaign against domestic violence according to a 2014 survey by the bloc.

Spanish Prime Minister Pedro Sanchez tweeted his support for the protests saying "the night will be violet", referring to the signature color of Spain's feminist movement.