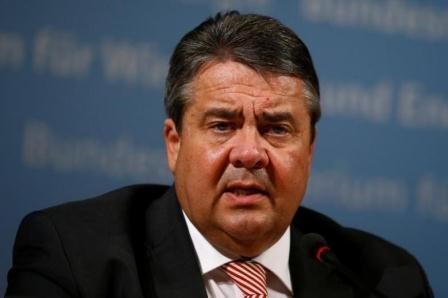 German Economy Minister Sigmar Gabriel heads to Iran next week with a planeful of industry executives keen to rebuild trade ties, but remaining U.S. sanctions and political concerns are holding back a hoped-for business boom.

Gabriel says a German-Iranian business commission will meet for the first time in 15 years, and forecasts concrete business deals will be announced, but also warned Tehran on Friday that to normalize ties it must accept Israel's right to exist, and stop what he called Iran's decisive role in the Syrian war.

Tehran said there could be no precondition for Iran-Germany relations and that it rejected the interference of any third party in its state affairs.

Gabriel is making his second visit to Tehran since the Islamic Republic reached a deal with world powers in July last year to lift economic sanctions imposed on Iran over its nuclear program, in return for curbs on its nuclear activities.

Industrial giant Siemens AG and automaker Daimler will be among the first German firms to benefit from opportunities in Iran, but they are proceeding carefully and only after legal reviews.

Exports to Iran jumped 15 percent in the first half of the year to 1.13 billion euros and could reach 4 billion euros in the full year, said Michael Tockuss, head of the Hamburg-based German-Iranian Chamber of Commerce.

He cited signs of movement in the German banking sector, which has been reluctant to underwrite business deals for fear of running afoul of remaining U.S. sanctions imposed on Iran for what Washington says is Tehran's money laundering, support for terrorism and human rights abuses.

"Rolling out the red carpet for Rouhani in Europe could be misunderstood as a signal that Iran is already an accepted partner in the world community," said Juergen Hardt, foreign policy spokesman for Merkel's conservatives.

"Iran considers defending the rights of the Palestinians as inseparable part of its foreign policy and will not relinquish supporting the Palestinian ideals under any circumstances," it quoted Foreign Ministry spokesman Bahram Qasemi as saying.

Ilse Aigner, economy minister of the German state of Bavaria, says she raised those concerns during two visits to Iran over the past year, but says hardliners could oust Rouhani unless he produces tangible benefits from the nuclear deal.

Aigner returned from Tehran earlier this month with agreements by three Iranian banks to open branches in Munich, which could smooth the way for more trade in coming years.

One big issue for small- and medium-sized firms is the inability to secure letters of credit for shipments of goods, said Werner Schroeppel, managing director of IMO GmbH, which exports components for wind energy facilities in Iran.

Schroeppel's firm is now using third parties to do business in Iran, but hopes the process can be streamlined so it can take part in an expected boom in Iran's wind energy sector.

Michael Sabet, an Iranian-German business executive whose company imports tonnes of saffron from Iran, said more banks are ready to provide letters of credit which he said could save up to 3 percent of the cost of a deal.

"The situation is easing," he said. "We used to have to wait three to four months to get approval. Nowadays it's just a phone call and some documents to exchange and that's it."