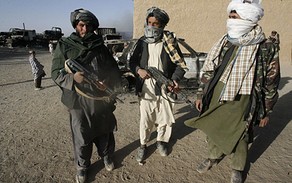 Taliban militants have launched a major attack on Kunduz city in northern Afghanistan. Almost a year after briefly taking over the city, the ,militants are reported to have mounted attacks from all sides.

Coordinated attack began when the terrorists engaged in intense fighting with government forces in the early hours of Monday (around 7.30pm GMT on Sunday, 2 October).

According to Sheer Ali Kamal, a Kunduz police official, fighting was raging in and around the city. "We are putting all our efforts together to push them back," he said.

An AFP correspondent also confirmed the fighting. Two Afghan army helicopters were seen flying over the city, and gunfire was heard on the deserted streets as shops and business establishments remained shut.

At the same time, a powerful explosion occurred this morning in Afghanistan's capital Kabul, as a result of an explosive device, one person died and two were injured.