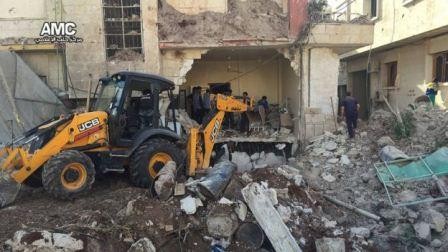 France and Spain are trying to get UN Security Council agreement for a resolution seeking a truce in the Syrian city of Aleppo, after the US ended its negotiations with Russia.

The draft text calls for a UN-sponsored truce monitor, an end to all fighting and military flights over the city.
Parties who fail to comply with the truce could face "further measures".

Russia immediately questioned the proposal and the grounding of flights, saying it was unlikely to bring peace.
The besieged rebel-held east of Aleppo has come under intense and sustained aerial bombardment by Syrian government and Russian forces since a truce brokered by the Washington and Moscow collapsed last month.

France's permanent representative to the UN, Francois Delattre, said: "We consider that this is our responsibility to do absolutely everything we can do, everything humanly possible to unite the Security Council behind our efforts to end the martyrdom in Aleppo."

But Russia's ambassador Vitaly Churkin said Moscow was "a little bit baffled" by the proposal for a new ceasefire monitoring mechanism when there is already one in Geneva "which has been there for a long time and frankly has not been used very effectively".

"If they were sincere, we can have a resolution, I suppose, which would be more balanced proposal," he added.
UN special envoy Staffan de Mistura said he deeply regretted the US decision to suspend talks with Russia but vowed "to push energetically for a political solution".

His spokeswoman, Jessy Chahine, said he was "still in intensive consultations on the way forward".