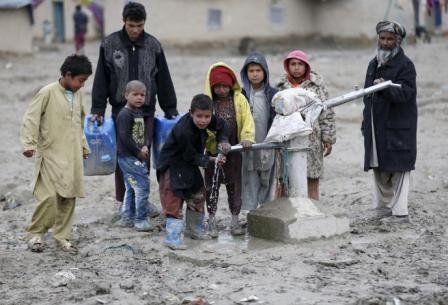 World powers convened in Brussels on Tuesday to raise billions more dollars for Afghanistan to keep the country running until 2020, but hopes for a new start to peace talks were overshadowed by a surge in Taliban insurgent violence.

Fifteen years after the U.S. invasion that ousted Taliban rulers who harbored jihadists behind the attacks on New York and Washington, Afghanistan remains reliant on international aid and faces resurgent militants that threaten its progress.

The two-day, European Union-led donor conference is seeking fresh funds, despite Western public fatigue with their governments' involvement in Afghanistan. Around 70 governments, including the United States, Russia, Iran, China and India, are attending, with pledges to be made on Wednesday.

EU foreign policy chief Federica Mogherini may try to bring together China, Iran, Russia, the United States, Pakistan and India on the sidelines of the conference in what would be the first concerted peace push since 2013.

"If we don't achieve peace, it's going to be extremely costly for the foreseeable future," Mellbin told Reuters.

U.S. State Department spokesman John Kirby said Kerry and Afghan leaders discussed ways to strengthen the government and efforts by the United States and its allies to improve the capabilities of the country's security forces.

They also spoke about the need for continued reform to fight corruption and promote security, Kirby said.

A senior U.S. State Department official said the United States was prepared to restart a peace process "without any pre-conditions", and noted that after forty years of conflict, Afghans were tired of war. U.S. and EU officials have been encouraged by a smaller peace agreement last month between the Afghan government and a local warlord.

But a senior Indian diplomat questioned whether the Taliban was ready to make peace. The West wants Pakistan to do more to strike remaining militants. "The fact remains that at least the Afghan Taliban continue to enjoy safe havens in Pakistani territory," the U.S. official said.

Afghanistan remains one of the world's most dangerous countries, with 1.2 million Afghans forced to live as refugees in their own country and another 3 million living in Iran, Pakistan or seeking asylum in Europe.