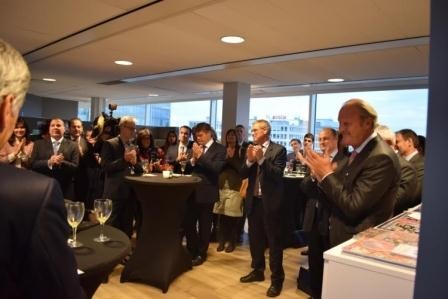 The European Azerbaijan Society (TEAS) has opened a new office in the middle of the diplomatic quarter of Brussels, the hub of the European Union (EU). The relocation reflects the fact that the TEAS Brussels office has been redesignated as TEAS Benelux.

Didier Reynders, Belgian Vice-Prime Minister and Minister of Foreign Affairs commented: “Azerbaijan and Belgium have been enjoying excellent relations for some years, and this has been enhanced by the presence of TEAS, which continues to organise events at various European institutions in Brussels. I am attending this event just two hours before Elmar Mammadyarov, my Azerbaijani counterpart, lands in Brussels. The role of TEAS in bringing Azerbaijan closer to Belgium and the rest of Europe cannot be underestimated. Belgium and Azerbaijan enjoy excellent relations.”


“Mutual trade missions and my own visit last year have resulted in greater foreign investment and knowledge exchange. It is excellent to see so many Belgian businesses active in Baku, but there is much scope to increase this level of bilateral investment. Belgian designers and businesses have contributed to the spectacular development of Baku. In particular, Fluxys is playing a major role in construction of the Trans-Adriatic Pipeline (TAP), the final stage of the Southern Energy Corridor that will bring Azerbaijani Caspian Shah Deniz gas to an Italian interconnector.


“By being based in Brussels, TEAS makes the Azerbaijani voice heard in European circles, and is successful in doing so. EU–Azerbaijani relations have developed strongly, and Association and Co-operation Agreements have been signed. A new Framework Agreement has now been ratified, covering a number of topics. I have met Azerbaijani President Ilham Aliyev, Elmar Mammadaryov, my Azerbaijani counterpart, and some of internally displaced persons (IDPs), who are the ongoing victims of the Armenian–Azerbaijani conflict over Nagorno-Karabakh. The office is based in Boulevard Bischoffsheim, named after a banker, philanthropist and entrepreneur from the early years of Belgian independence. We hope his enthusiasm, knowledge and sense of duty will be a guiding light for TEAS in fostering relations between Azerbaijan, Belgium and Europe.”


Marc Verwilghen, Director, TEAS Benelux and former Belgian Economy Minister, amongst other positions, commented: “Why is Brussels and the Benelux countries so important for TEAS? There are myriad reasons – Brussels is the capital of Europe and the EU institutions; Brussels is the headquarters of NATO; Brussels has more Ambassadors per square metre than anywhere in the world; Benelux was the precursor of the EU and Benelux is the representation of Belgium, the Netherlands and Luxembourg – three nations with a powerful economic standing; and Benelux is the test laboratory of the EU.


“Azerbaijan is geopolitically a pivotal country, as it lies in a crucial geographical location at the intersection of multiple crossroads between Europe and Asia and Russia and the Middle East. The key strategic value of the country is twofold, as Azerbaijan occupies an unparalleled location between Russia, Turkey and the rejuvenated Iran – these three powers are playing and will play an increasing role in determining the future trajectory of international politics and economics. Furthermore, Azerbaijan is the hub of the burgeoning 7200km North–West Transport corridor connecting Europe to Central Asia and of the $45bn Southern Energy Corridor, currently under construction. This will bring Azerbaijani Caspian gas to Europe and provide diversity of energy supplies from 2020.

“Azerbaijan is secular, tolerant, multicultural and multifaith. Representatives of the World Jewish Congress have just visited the country, as has Pope Francis, who recognised its tolerant stance. It is a model in its region, bulwark against extremism and example for the world.”


Sabina Rakcheyeva, violinist and the first Azerbaijani graduate from the Juilliard School in New York and Cultural Advisor, TEAS, then cleverly combined plaintive Azerbaijani folkloric melodies with the main theme from J.S. Bach’s Toccata and Fugue in D Minor. This constituted musical analogy for the way in which TEAS and Azerbaijan bridges the real and imagined gaps between east and west, and Europe and Asia.


H.E. Fuad Isgandarov, Azerbaijani Ambassador to Belgium, Luxembourg and the EU, commented: “Benelux countries are the cornerstone of the EU, and that is why it is important for TEAS Benelux to exist. After 100 years of wars, the formation of Benelux managed to create something completely peaceful, and we need this peace in the Southern Caucasus, not just in Azerbaijan, but in Georgia, too. TEAS is working very transparently in providing information and creating an impression of my country at European level. Azerbaijan is a defender against terrorism, extremism, organised crime and upholder of many EU values. Azerbaijan will work with its Belgian, Dutch and Luxembourgish friends, and others from across the EU. We are stronger if we are all together.”

Tale Heydarov, Chairman and Founder, TEAS, concluded: “TEAS has come a very long way. We aim to promote our culture and history and enhance EU–Azerbaijani relations. I reiterate that Azerbaijan shares the same values and vision as the EU and we can overcome the challenges we face today. My pledge is that TEAS will continue to make its contribution.”