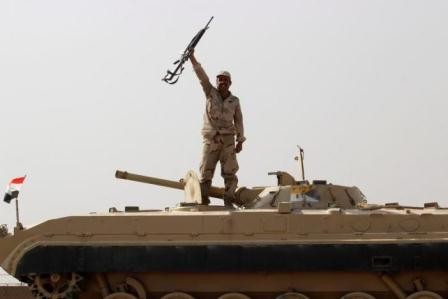 Forces trained by the Turkish military at the Bashiqa camp in northern Iraq will take part in the planned operation to drive Islamic State out of the city of Mosul, Turkey's state-run Anadolu Agency reported on Friday.

It cited officials who took part in talks between Turkey and the United States, as well as Iraqi sources, as saying the operation would begin within a few days, "if there is no extraordinary development".

Turkey has been locked in a fierce row with Iraq over who should take part in the Mosul assault. On Thursday, President Tayyip Erdogan's spokesman warned any mistake in the operation could result in hundreds of thousands of refugees.

Mosul, home to up to 1.5 million people, has been at the heart of Islamic State's self-declared caliphate in Iraq since 2014. The U.S.-backed assault on the city has been expected to begin this month.

Anadolu said the Turkish-trained forces would participate in the operation together with the Iraqi army and the Peshmerga forces of the Kurdistan Regional Government in northern Iraq, with the latter launching the operation.

Turkish soldiers have been training Sunni Muslim and allied Peshmerga units at Bashiqa.

Baghdad's Shi'ite-led government objects to the Turkish military presence and wants its own forces at the forefront of the Mosul assault. Turkey fears the use of Shi'ite militias, which Iraqi army units have relied on in the past, will stoke sectarian unrest.

Broadcaster CNN Turk said the head of Turkey's armed forces, General Hulusi Akar, was going to the United States to attend a meeting of his counterparts from coalition countries.