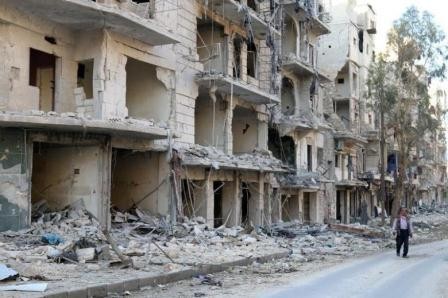 Turkish jets on Wednesday unleashed more than 20 air raids against the Syrian Democratic Forces, a Kurd-led group of militias north of Aleppo, Kurdish authorities and a war monitor said.

The jets targeted positions in the villages of al-Hasiya, Um al-Qura and Um Hosh, which the SDF had captured from Islamic State, the Syrian Observatory for Human Rights said late on Wednesday.

Turkey, a main backer of the insurgency against President Bashar al-Assad, entered the Syrian conflict in August, using its armor and air power to help Free Syrian Army rebel groups take territory near the border held by Islamic State.

However, Ankara's intervention also aimed to prevent the SDF from gaining more ground along the frontier and connect three de facto autonomous Kurdish cantons in northern Syria that have emerged during the five-year civil war.

The strongest force in the SDF is the Kurdish YPG militia, which Turkey regards as the Syrian wing of the Kurdistan Workers Party (PKK), which it has been fighting within its own frontiers for decades. The YPG and PKK deny having direct links.

The Turkey-backed FSA groups have in recent weeks been pushing southwards from the frontier towards al-Bab, the last big town held by Islamic State in northwest Syria. The villages taken by the SDF from Islamic State also represented an advance towards al-Bab.