Kurdish forces in fresh push to close in on Mosul 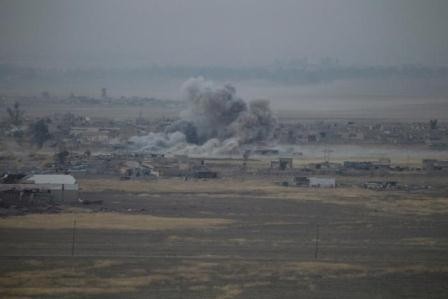 An Iraqi army elite unit and Kurdish fighters on Thursday launched a fresh offensive to dislodge Islamic State militants from villages around Mosul, their last major city stronghold in Iraq, with the air and ground support of the U.S.-led coalition.

Howitzer and mortar fire started at 6:00 a.m. (0300 GMT), hitting a group of villages held by Islamic State around 20 km (13 miles) north and east of Mosul, while helicopters flew overhead, Reuters reporters on the scene said.

The Iraqi government announced on Monday the start of the offensive on Mosul, the country's second-largest city, two years after it fell to the militants who declared from its Grand Mosque a caliphate spanning parts of Iraq and Syria.

Four days into the assault, U.S.-backed government and Kurdish forces are steadily recovering outlying territory before the big push into the city itself, expected to be the biggest battle in Iraq since the 2003 U.S.-led invasion.

"The objectives are to clear a number of nearby villages and secure control of strategic areas to further restrict ISIL's movements," the Kurdish general military command said in a statement announcing the launch of Thursday's operations.

Dozens of black Humvees of the elite Counter Terrorism Service mounted with machine guns headed in the direction of Bartella, the main attack target on the eastern front, to the sound of machine gun fire, a Reuters reporter said.

A cloud of black smoke wreathed some frontline villages, probably caused by oil fires, a tactic the militants use to escape air surveillance.

On the northern front, Kurdish Peshmerga shot down with machine guns an unmanned drone aircraft that came from the Islamic State lines in the village of Nawaran a few kilometers away.

It was not clear if the drone, 1 meter to 2 m (1.1 yard to 2.2 yards) wide, was carrying explosives or just on reconnaissance.

"There have been times when they dropped explosives," said Halgurd Hasan, one of the Kurdish fighters deployed in a position overlooking the plain north of Mosul.

Ali Awni, a Kurdish officer, kept a handheld radio receiver open on a frequency used by Islamic State. "They are giving targets for their mortars," he said.

"Liberating Mosul is important for the security of Kurdistan," Awni added. "We will have to fight them in the mind as well, to defeat their ideology."