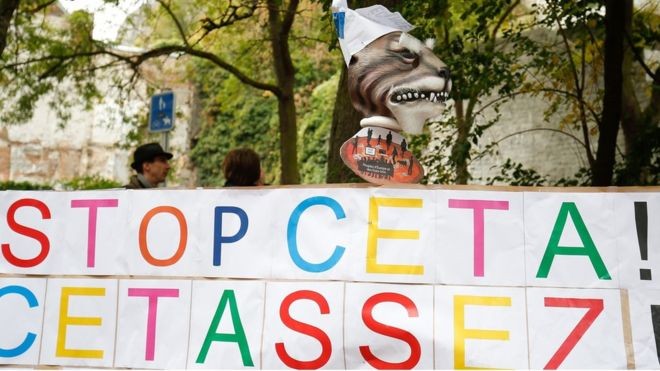 Axar.az reports that, his comments appeared to dash hopes the Ceta deal could be signed on Thursday but European Council President Donald Tusk said it was still possible. This is the EU's most ambitious free trade deal to date but Belgium needs its regions' approval to sign it.

Is Ceta a good model for Brexit?

Mr Michel said he had told Mr Tusk that Belgium could not sign Ceta (the acronym for the Comprehensive Economic and Trade Agreement).

The other 27 EU governments want to sign the agreement, which has been in the pipeline for seven years.

The European Commission had set Belgium a Monday deadline to make its decision on the deal. In a tweet on Monday, Mr Tusk wrote: "Together with (Canadian) PM @JustinTrudeau, we think Thursday's summit still possible. We encourage all parties to find a solution. There's yet time."

For the deal to pass, Belgium's federal, regional and community bodies (seven in all) must give their approval.

Wallonia, a staunchly socialist region of 3.6 million people, has led objections to the deal, demanding stronger safeguards on labour, environmental and consumer standards. But at talks with Mr Martin on Monday, it emerged that two other bodies, Brussels and that of the French-speaking community, also opposed Ceta.

The Belgian socialists' fears echo those of anti-globalisation activists, who say Ceta and deals like it give too much power to multinationals - power even to intimidate governments. There have also been big demonstrations in several EU countries against Ceta and the TTIP trade talks between the EU and the US.

On Sunday, the European Commission presented a new clarification to Wallonia on the mechanism for settling disputes with investors.

The rules for trade arbitration are one of the thorniest issues in the deal. But Belgium's RTBF news reported (in French) that the latest EU document did not satisfy the Walloon politicians.

Canada and the EU would eliminate 98% of tariffs under Ceta, which was negotiated over five years between 2009 and 2014. Supporters say this would increase trade between them by 20%, and would especially help small businesses.

Canadian Trade Minister Chrystia Freeland was bitterly disappointed on Friday when talks with Wallonia broke down and she flew home, during an EU summit in Brussels.

On Monday, Wallonia's regional leader Paul Magnette warned: "We will never decide anything under an ultimatum or under pressure."

His counterpart in Belgium's Dutch-speaking Flanders region, Geert Bourgeois, said the blockage was "a real shame".

"We're the laughing stock of the whole world," said the centre-right leader, quoted by Reuters news agency. "It's bad for Wallonia, for Flanders, for Belgium, for Europe, for the whole world."

Some UK politicians see Ceta as a potential model for a Brexit trade deal with the EU. Ceta does not involve EU-style free movement of labour. But for British services - 80% of the UK economy - the Ceta terms are less favourable than those they have now.