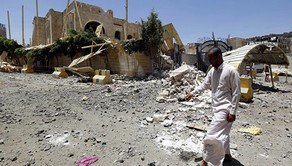 The proposed UN plan for a truce in the Yemen has been rejected President Abd Rabbo Mansour Hadi.

Axar.az informs referring to the AFP, the president has met with the UN special envoy on Yemen Ould Sheikh Ahmed and rejected the UN proposal.

Earlier, the UN proposed to resolve the conflict in Yemen between the government and rebels Huthis by creating a new structure of power. New UN plan calls for a series of concessions from both sides: Huthis will have to leave the capital, in exchange for which the vice-president will leave his post, and powers of Hadi will be severely limited.