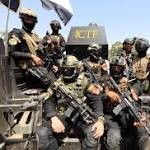 An Iraqi officer in Bazwaya, the last village east of Mosul, says residents have hung up white flags on buildings and from windows in a sign they would not resist special forces troops entering to drive out Islamic State fighters.

Maj. Salam al-Obeidi says troops are asking the villagers to stay inside their homes as the Iraqi forces move through the streets. It's a precaution against potential suicide bombers, a common IS tactic.

Meanwhile, Iraqi Prime Minister Haider al-Abadi announced on his website that he would be visiting troops near the front line.