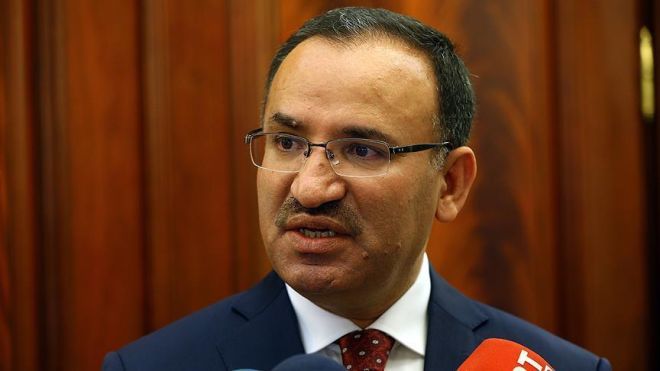 “What we are doing is looking to find a solution to an ongoing problem; it is not to protect rape or protect rapists. We seek the heaviest punishment for rapists,” Bekir Bozdag said amid debate over a new bill on sexual abuse.

The bill’s proposed changes initially advanced in parliament despite objections by two opposition parties – the Republican People's Party (CHP) and Nationalist Movement Party (MHP). The proposal will be debated again next Tuesday.

However, Bozdag defended the bill and criticized the opposition lawmakers.

He said that under the new law, entering into a marriage with someone underage would remain a crime punishable by 16 years in prison.

Prime Minister Binali Yildirim said the new law will provide one-time relief for men in prison who got married to girls under age 16.

He said there were those who get married young and often “do not know the law. Then they have children, and the father goes to prison. The children are left alone with their mothers."

Speaking to reporters following Friday prayers, Yildirim said that 3,000 families would be affected by this new law.

He added: "The proposal aims to remedy unjust suffering."

The Woman and Democracy Association issued a statement criticizing the proposal, saying, "If the proposal passes into law as it is, it paves the way for the assailant who committed sexual abuse to influence the victim and her relatives."

The statement added that the proposal would allow assailants to get out of prison through marrying the victim.

- A case of mistaken age?

In the central Anatolian province of Konya, Emine Erbas, 24, got married in 2006 when she was 14 years old, according to court records. Emine has three children, including two twins.

"I got married to my husband after falling in love," Emine told Anadolu Agency, saying she sees herself and her children as victims.

Emine's husband was sentenced to nearly 11 years in prison, and her mother and father-in-law to over three years apiece.

Emine said that after she was born, her father registered her with the state as being three years younger than her actual age. So while her marriage supposedly took place when she was 14, in truth she was 17, she claimed.

A medical test proved her actual age to the court, she said, but the court ignored this evidence.

The legal age for marriage in Turkey is 17 but under Civil Code Article 124 a judge can – in extraordinary circumstances – allow a 16-year-old to marry.

A draft law which would amend parts of Turkey’s Penal Code – particularly as it relates to sexual abuse – was submitted to parliament on Thursday by Mehmet Mus, vice chair of the AK Party’s parliamentary group.

Under current law, in cases of sexual abuse where the victim is under 12, the minimum sentence is 10 years, and for victims age 12-18, the sentence is 8-15 years.