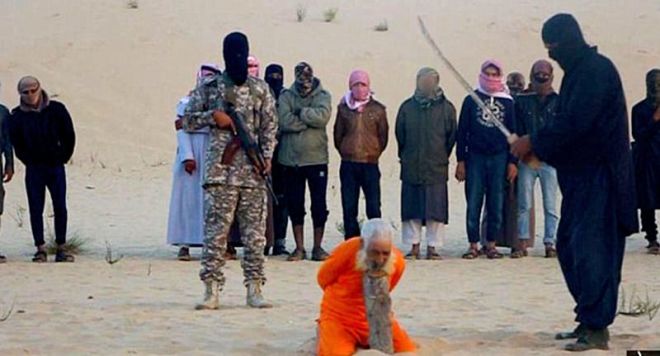 An iconic 100-year-old cleric has been beheaded by so-called Islamic State fighters after being accused of witchcraft.

The visibly frail old man, known locally as Sheikh Sulaiman Abu Haraz, was dragged through the streets of the Egyptian Sinai Peninsula before having his head forced onto a wooden executioner’s block.

Then, as the graphic images show, the Islamic militants slashed at the elderly man’s neck with a large sword – separating it from his body in front of a small crowd of people.

The killing was one of two carried out on the day by an ISIS affiliated group known as Ansar Bayt al-Maqdis who operate across Egypt and the Gaza Strip.

According to numerous sources the reason for the 100-year-old’s barbaric execution was that he had been accused of ‘practising witchcraft’.

Haraz was an ‘iconic Sufi cleric’ referred to as ‘one of the most symbolic Sufi clerics and elders of the Sinai Peninsula’.

Sufiism is the teaching of the ‘inner dimensions’ of Islam and aims to place Muslim’s on the pathway to Allah through peaceful means, encouraging Muslims to embrace the divine presence of Mohammad in this life.

The armed militants are reported to have kidnapped Haraz from his home in the early hours before taking him to his place of death.