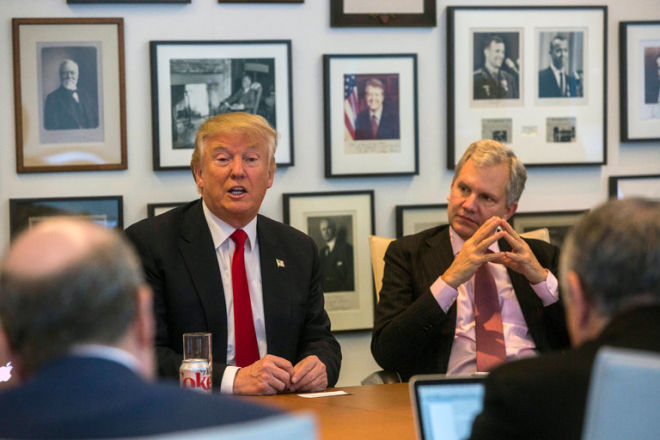 President-elect Donald Trump met with journalists and executives at the New York Times on Tuesday after a seesaw morning in which the highly anticipated get-together was canceled and then suddenly rescheduled.

After Mr. Trump called off the meeting, accusing the paper of changing the ground rules, the misunderstanding was cleared up and the president-elect headed to the Times headquarters in Midtown Manhattan. The lunchtime meeting included an off-the-record sit-down with executives followed by an on-the-record meeting with journalists.

Mr. Trump started the on-record meeting by saying he respected the Times but complained that its coverage of his campaign had been “very rough,” according to tweets from reporters in the room that were also posted in a live blog on the Times’ website.

“I’ve been treated very unfairly,” he was quoted as saying. “I will say the Times is about the roughest of all.”

He said he would like to improve his relationship with the paper, as it would make his job easier.

The meeting with the Times comes a day after Mr. Trump sat down with senior executives and on-air talent from the major broadcast and cable news outlets at Trump Tower, where he criticized their election and postelection coverage.

In the off-the-record meeting on Monday, which was organized by Mr. Trump’s staff, he complained about news coverage, including predictions he would lose to Hillary Clinton, but also said he wanted to wipe the slate clean, according to a person familiar with the gathering.

In the sit-down with the Times, Mr. Trump was quoted as defending his appointment of media executive Steve Bannon, who previously was executive chairman of the conservative news site Breitbart News, as his chief strategist amid criticism that he holds white nationalist views.

“I’ve known Steve Bannon for a long time. If I thought he was a racist or alt-right…I wouldn’t even think about hiring him,” Mr. Trump was quoted as saying.

He defended Brietbart as a successful, more conservative news organization and said he doesn’t think he did anything to energize the alt-right movement.

Mr. Trump was also asked about climate change, conflicts of interests with his businesses, Israel, Syria and President Barack Obama during the interview.

Early Tuesday, it wasn’t even clear if the meeting would happen. Before 7 a.m. Eastern time, Mr. Trump tweeted that he called off the meeting “with the failing @nytimes when the terms and conditions of the meeting were changed at the last moment. Not nice.” He also tweeted that “perhaps a new meeting” would be set up and proceeded to criticize the publication for covering him “inaccurately and with a nasty tone.”

The Times responded by saying the ground rules as had been agreed upon the day before—in which Mr. Trump would meet with publisher Arthur Sulzberger Jr. and other executives for an off-the-record exchange followed by an on-the-record meeting with journalists and editorial columnists—hadn’t been changed.

Mr. Trump has been a vocal critic of print and TV outlets—particularly the Times and CNN—throughout his campaign and since winning the election. He has frequently urged his supporters not to trust the mainstream media.