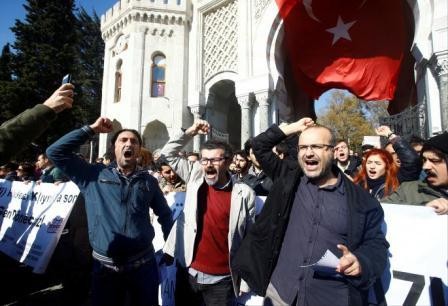 Several hundred academics, students and union members under the watch of Turkish riot police protested in front of Istanbul University on Thursday against a purge of thousands of education staff since an attempted coup in July.

Ankara, which says U.S.-based cleric Fethullah Gulen orchestrated the July 15 putsch, has launched a crackdown in which 110,000 civil servants, judges, prosecutors and police have been suspended or dismissed over suspected links to the preacher.

"Shoulder-to-shoulder against fascism", "we will win by resisting", the crowd chanted as dozens of police wearing gas masks looked on.

Among those suspended or removed in the purges since July are nearly 50,000 academics, teachers and other education staff. Under the coup investigation, some 37,000 people have also been jailed pending trial.

The crackdown has worried rights groups and Western allies.

Officials say the measures are justified by the threat posed by the putsch, in which more than 240 people were killed when rogue soldiers commandeered tanks and fighter jets, opening fire on parliament and other key buildings.

"We won't surrender", said one banner held up by protesters, echoing a headline in the secularist opposition Cumhuriyet newspaper, whose editor and top staff were detained this week on accusations of coverage precipitating the coup.

"We are facing a period worse than the coup," said Tahsin Yesildere, head of a university teaching staff association.

"In our country, which is being turned into a one-man regime through the emergency, all opposition resisting to this have become targets," he told Reuters.

Gulen, who has lived in self-imposed exile in the United States since 1999, has denied involvement in the coup.