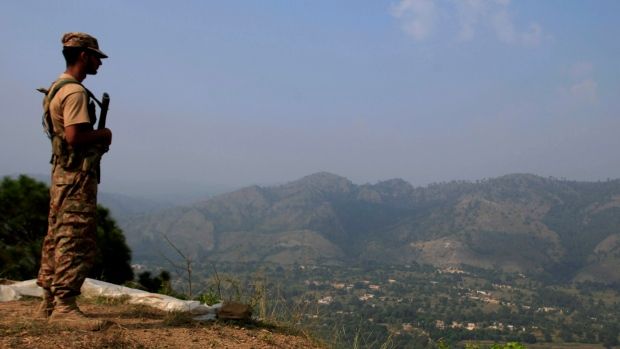 Marshal Sohail Aman’s warning came as tensions are soaring between Islamabad and New Delhi over the contested Himalayan territory where Pakistan said Indian fire on Wednesday killed 12 civilians and three soldiers — the deadliest incident in weeks of border clashes.

Aman said that if Indian forces escalate the crisis, Pakistani troops “know full well how to deal with them.”

Afterward, Johnson expressed concern over the Kashmir escalation and appealed to the two South Asian countries “to maintain a positive dialogue” to resolve the dispute of the territory, which is split between Pakistan and India and claimed by both in its entirety.

The two neighboring countries have fought two of their three wars over Kashmir, which remains one of the world’s most intractable conflicts.

In Wednesday’s escalation, Indian artillery and shelling hit several villages along the Line of Control that divides the Pakistan- from India-controlled sector of Kashmir, killing 12 civilians. Three Pakistani soldiers were later also reported killed in an exchange between the two sides.

The exchange came a day after the mutilated body of an Indian soldier was found in Kashmir. The Indian military did not say whether the soldier was killed by Pakistani soldiers or Kashmiri rebels, who have been fighting against Indian rule since 1989.

“We will never abandon our Kashmiri brethren in their freedom struggle,” Sharif later said, according to a government statement.