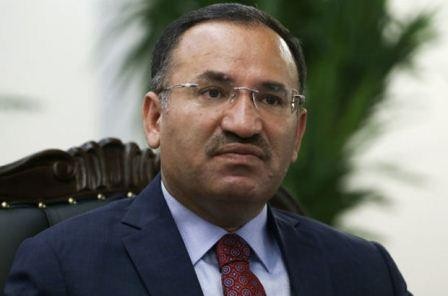 Turkey is an independent state and Germany cannot interfere in its internal affairs, Turkish Justice Minister Bekir Bozdag said Friday, in response to remarks by German Chancellor Angela Merkel on the state of media freedom in Turkey.

On Wednesday, Merkel said she was alarmed by Turkey’s crackdown on freedom of the press and warned this could hamper EU accession talks.

"Both Merkel and the government spokesperson thought they have right to opine on all ongoing cases. They have to consider Turkey as independent and sovereign and regard the Turkish justice system as being as independent and neutral as the German justice system. You cannot interfere in Turkey’s interior issues. That is not a German minister’s business," Bozdag said, commenting on Merkel's remarks. On Monday, police in Istanbul detained Murat Sabuncu, the editor of independent newspaper Cumhuriyet, and 12 of its journalists and managers, adding to a trend in which more than 160 media outlets have been closed since the failed coup attempt in July.