Pride but not much profit in Melania Trump's hometown 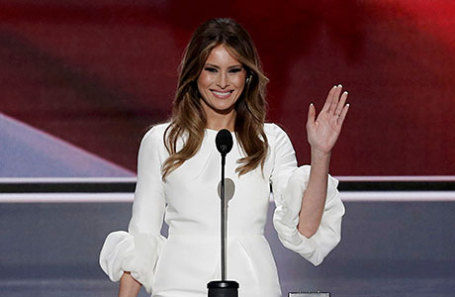 When Donald Trump was elected president of the United States last month, the Pizzeria Rondo in Sevnica created a cake named after his wife Melania, who grew up in the Slovenian town.

Mascarpone enriched with strawberry mousse with small candies of gold and silver color on top.

The pizzeria also offered a burger called Trump, notable for the spicy pepperoni it featured.

But after a public warning earlier this week from a lawyer representing Melania Trump, who said that using Melania's name and photo without her consent is not allowed, the burger has changed its name to the Presidential Burger.

"Using a photograph for commercial purposes is not allowed without a consent of the person on the photo," Musar said.

Jars of locally-made honey with Melania's picture have disappeared from shop shelves in the past few days. The cakes are sticking with the label for now on the grounds that they only use her first name.

"After consulting Mrs. Trump we only warned the public that there are borders...but we did not send concrete warnings or call anyone specifically," Musar told Reuters.

The legal intervention may have dampened immediate hopes in this town of 4,500 people that it can benefit from its link to international celebrity and political power, although some are optimistic that it will in due course.

Sevnica lies on the banks of the River Sava amid forest-covered hills. Local products include honey, wine, and fittingly, shoes and lingerie.

Melania was born in a hospital in Novo Mesto in 1970, when Slovenia was part of the former Yugoslavia, to car dealer Viktor Knavs and his wife Amalija and she was raised in Sevnica.

She started modeling at the age of 16, then pursued a career in Paris and Milan before moving to New York in 1996.

She married Trump in a lavish wedding in Florida in 2005 and will become first lady of the United States on Jan. 20, 2017 -- only the second to have been born outside the country.

At a roundabout leading into Sevnica, a local newspaper has put up a giant poster featuring Melania Trump's picture and the greeting: "Welcome to the hometown of the First Lady of the USA".

But since the burger and honey flap, there's not a lot more evidence of its illustrious connections.