May went to Bahrain to pursue a £30billion trade deal - Photos 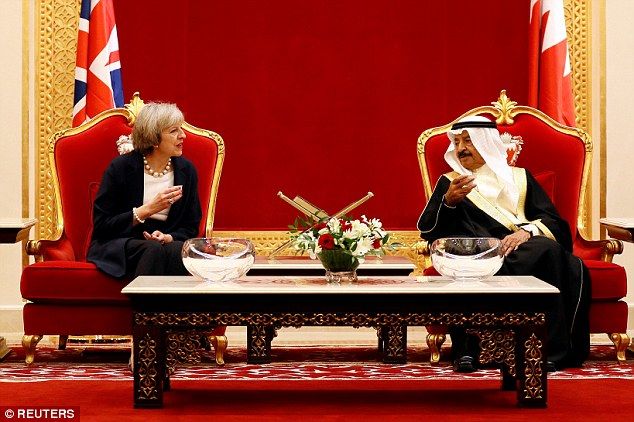 Theresa May has temporarily escaped from the raging Supreme Court Brexit battle after touching down in Bahrain to pursue a £30billion trade deal agenda as she visits the Gulf for a landmark trade meeting.

Attending the Gulf Co-operation Council summit in Bahrain, the Prime Minister is moving to free up business transactions between the UK and Middle East.

Mrs May is only the third Western leader, and first woman, to be invited to the gathering.

Speaking ahead of the visit, the Prime Minister said: 'The Gulf is already our largest investor and our second biggest non-European export market and I think there is huge potential to expand this relationship in the years ahead.

'That's why it is such an honour to be invited to attend the Gulf Co-operation Council where I will have the opportunity to talk to all six leaders about how we can develop our trade relationship, as well as co-operation on security and defence.

'Across these six countries there are exciting opportunities for British business, from energy to education, infrastructure to healthcare and here in the UK, investment from the Gulf is helping to regenerate cities from Aberdeen to Teesside, Manchester to London.

'As the UK leaves the EU, we should seize the opportunity to forge a new trade arrangement between the UK and the Gulf.
'This could transform the way we do business and lock in a new level of prosperity for our people for generations to come.'

The Government says it has identified £30billion of top level opportunities for British businesses across 15 sectors over the next five years.

Mrs May will attend a dinner with the six leaders of Saudi Arabia, Kuwait, the United Arab Emirates, Qatar, Bahrain, and Oman on Tuesday, before addressing the plenary session of the summit on Wednesday.

Before leaving for the visit, Mrs May said the controversial human rights record of Gulf states should not be a bar to increased post-Brexit trade with them.

With her hosts having been sharply criticised for the way they suppressed protests during the Arab Spring, Mrs May insisted closer ties will allow the UK greater influence in pushing its values.