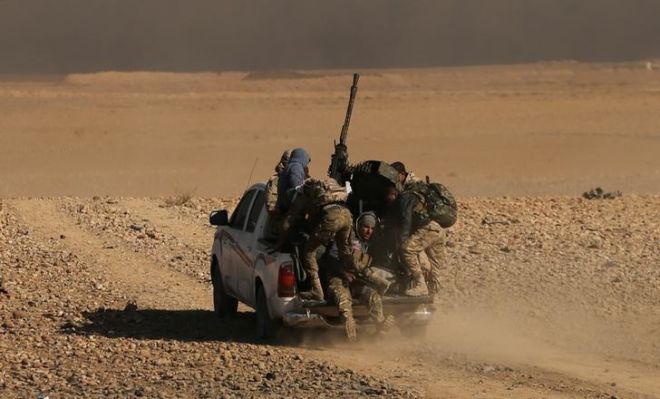 Iraqi troops who briefly seized a Mosul hospital believed to be used as an Islamic State base were forced to withdraw from the site, but managed to establish a base for army tanks nearby after days of fierce back-and-forth fighting, residents said.

The rapid advance into the Wahda neighborhood where the hospital is located marked a change of tactic after a month of fighting in east Mosul in which the army has sought to capture and clear neighborhoods block by block.

The ferocity of the fighting reflects the importance of the army's push from southeast Mosul towards the center, their deepest advance in a grueling seven-week offensive to crush Islamic State in Iraq's largest northern city.

The soldiers seized Salam hospital, less than a mile (just over 1 km) from the Tigris river running through central Mosul, on Tuesday but pulled back the next day after they were attacked by six suicide car bombs and "heavy enemy fire", according to a statement by the U.S.-led coalition supporting Iraqi forces.

Coalition warplanes, at Iraq's request, also struck a building inside the hospital complex from which the militants were firing machine guns and rocket-propelled grenades, it said.

The soldiers involved in the action are at the spearhead of a U.S.-backed, 100,000-strong coalition of Iraqi forces including the army, federal police, Kurdish peshmerga fighters and mainly Shi'ite Popular Mobilization forces battling to crush Islamic State in Mosul.

In another part of Mosul already recaptured by government troops, Iraqi police fired shots in the air and threatened to whip crowds with a hose as residents tried to overrun the first distribution of aid by UN agencies inside the city.

The distribution aimed to reach 45,000 people in total at several locations. As word of the aid spread, residents of the Zuhour neighborhood flocked to a boys' primary school chosen as a distribution point.

Hundreds surged forward against just a handful of men pushing to close the gate. They burst through, and began climbing over the walls and pushing in through the exit until the police, firing shots in the air and wielding long sticks, managed to regain control.

Saad Salih, 56, came in an electric wheelchair, pushed by a neighbor because there was no electricity in Mosul to charge it. "We need everything," Salih said.