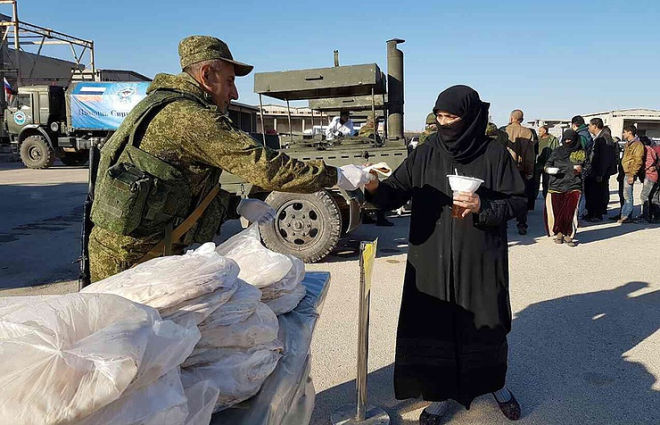 The Russian Defense Ministry has organized a mass escape for civilians from Aleppo along the humanitarian corridors.

"The Russian reconciliation center has organized escape for civilians from east Aleppo along the humanitarian corridors in Karim-Khun and al-Mahayar to the city's safe districts," the ministry said.

The people, who have used the corridors, are accommodated at special humanitarian centers, where they all receive hot food and medical assistance.

"People are escaping along the humanitarian corridors in an ongoing flow to the part of the city, controlled by the Syrian government," spokesman of the Russian Defense Ministry Major General Igor Konashenkov said. "The Syrian government controls 93% of Aleppo."
The Russian center for reconciliation of the warring parties in Syria uses drones to monitor round-the-clock how civilians are escaping the blocked districts of the city. The online broadcast is available on the ministry’s website.

For the time of the humanitarian escape, the Syrian forces have stopped the attack. As the people flee the eastern districts, the Syrian forces will continue the combat operation to push out or kill the militants, the Russian Defense Ministry said.