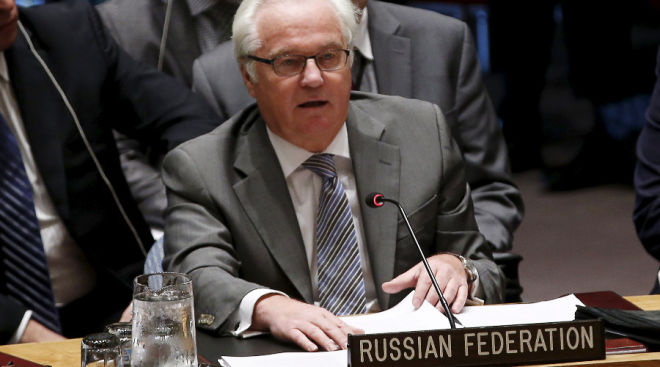 Russia’s engagement in the Syrian crisis prevented militants from gaining control over Damascus, cut down their military and economic base and helped win back some captured Syrian territories, Russia’s UN envoy Vitaly Churkin told the UN Security Council.

“Russia’s [air forces] managed to prevent terrorists from gaining control over Damascus, we significantly cut down military and economic capabilities of militant groups and helped win back vast territories,” Churkin said at a Security Council meeting in New York on Friday.

Russia keeps on trying to mediate the dialogue between the Syrian government and opposition forces to “come to a consensus and diplomatically settle the crisis,” Churkin added.

“We are convinced that there is no alternative to the political resolution [than the one] based on the inclusive inter-Syrian dialogue with the parallel provision of ceasefire, access to humanitarian aid and continuation of the fight against terrorism,” the Russian envoy said, stressing that Moscow has advocated a peaceful settlement while respecting Syria’s sovereignty and territorial integrity.

As the military operation in eastern Aleppo comes to an end, “overall ceasefire and resuming peace talks” becomes an ultimate goal in Syria, Churkin noted, adding that Damascus has more than once announced that it is open to dialogue.

Churkin believes that the current moment must be favorable for initiating peace talks – an idea that echoes what UN special envoy to Syria Staffan de Mistura recently said, Churkin told journalists after the Security Council meeting.

The Russian envoy also discussed the French resolution on Aleppo, which is expected to ensure that international observers are deployed to Syria.

“I was listening to what my French colleague had to say and there were some elements which I thought were questionable, but we need to have a look at the text,” Churkin said.

“It takes weeks to deploy observers. I express regret once again… that the US was insistent to take UN monitors out of Syria. We have 300 UN monitors, it took several weeks to deploy those monitors. To imagine that you can do it within two or three days is really unrealistic,” he said.

The meeting on Friday was initiated at France’s request and was supposed to brief the Security Council on the evacuation process that involves thousands of civilians and fighters leaving eastern Aleppo.

The evacuation was suspended on Friday after the militants refused to set the pro-government POWs free as has been agreed, and attempted to bring out heavy weapons, RT’s Lizzie Phelan reported, citing a senior Syrian Army general. The government forces have also called for wounded people to be evacuated from two Shi'ite villages controlled by the militants. Phelan reported that some clashes have taken place during the day.