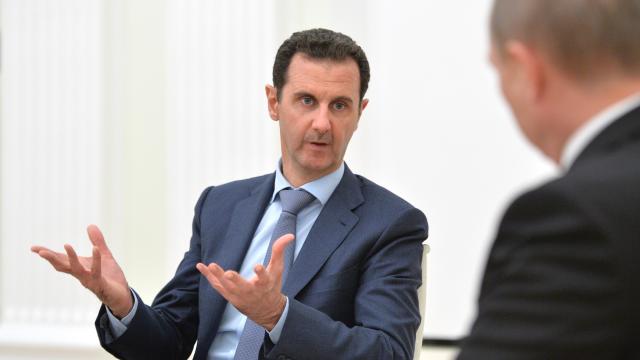 President Bashar al-Assad sent a cable to Russian President Vladimir Putin in which he offered condolences over the victims of the crashed Tu-154 Russian passenger plane.

President al-Assad said in the cable that the news of the crashing of the plane, which was carrying dear friends who were on their way to Syria to share with Syrians their joy for holidays and the victory in Aleppo, elicited great sadness.

He prayed for the peace of the victims' souls and offered condolences to their families, asserting that Syria and Russia are partners in the fight against terrorism and that they share joys and sorrows.

President al-Assad offered condolences to the Russian people and wished them patience to overcome this ordeal.

Earlier today, Russian sources reported that a Tu-154 passenger plane disappeared from radars then crashed shortly after taking off from an airport near Sochi in Russia, and that preliminary information indicates that the cause of the crash may have been a technical issue during takeoff.

The plane, which was heading to Syria, had 92 people on board, including 84 passengers and 8 crew members, and 68 of the passengers were members of the Alexandrov Ensemble army choir, in addition to Head of the Russian Defense Ministry's Department of Culture Anton Gubankov, renowned charity activist and humanitarian worker Elizaveta Glinka aka "Doctor Liza," and crews from Channel One Russia, NTV, and Zvezda TV channels.