US intensifies weapons supply to PYD/PKK 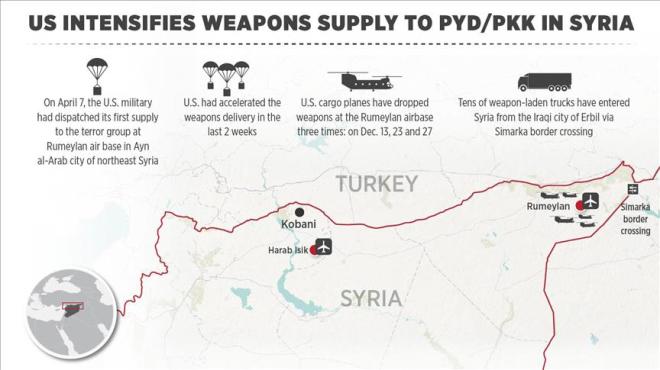 The United States have provided weapons supply to the Democratic Union Party (PYD), the PKK terror group affiliate in Syria, many times in 2016. But only a few of these arms deliveries could be ascertained.

On April 7, the U.S. military had dispatched its first supply to the terror group at Rumeylan air base in Ayn al-Arab city of northeast Syria, according to an Anadolu Agency correspondent in Al-Hasakah province.

A large amount of ammunition were carried to the base with US cargo planes from the northern Iraqi city of Erbil.

Local sources claimed that Pentagon continues its arms supply to the airbase, which was established by the U.S. army in October 2015.

During an operation this summer to capture another northern Syrian city, Manbij, at western coast of the Euphrates River, the U.S. had accelerated the weapons delivery.

Even before the ongoing operation in Raqqa, which has been launched days before the Nov. 8 presidential election in the U.S., the terror group received a huge amount of arms including heavy weapons.

In the past two weeks, U.S. cargo planes have dropped weapons at the Rumeylan airbase three times: on Dec. 13, 23 and 27.

The last supply was the biggest one.

Meanwhile, tens of weapon-laden trucks have entered Syria from the Iraqi city of Erbil via Simarka border crossing.

Despite all of these mobility on the ground, U.S. officials continue to refuse Pentagon’s arms support to the PYD/PKK terrorists.

The U.S. ambassador to Turkey John R. Bass told in an interview on Dec. 23 that his country did not directly support them.

“We didn’t directly help PYD, not with weapons nor ammunition,” he claimed.

But only hours after his statement, the U.S. army launched a fresh delivery to the terror group.

Turkish Foreign Minister Mevlut Causoglu on Thursday slammed the U.S. ambassador and said that it was “clearly known” that the US had supplied PKK’s Syria offshoots.

"To this day, the US has given weapons to the YPG. Full stop," he said in a reaction to Bass’ statement.

"The U.S. has supplied both the PYD and YPG. That is very clear. Both they [the U.S.] and we know well that weapons are supplied on the grounds of fighting against Daesh," Cavusoglu said.

The YPG is the armed wing of the PYD -- the Syrian offshoot of the PKK, which is designated a terrorist organization by Turkey, the U.S. and the EU.

According to Turkey, the YPG and PYD are terrorist organizations, too, as they are affiliates of the PKK.

However, the U.S. considers YPG/PYD a "reliable partner" on the ground in Syria and continues to support them in the field. The terrorist group operates currently in northern Syria and controls the majority of the area close to the Turkish border.

Turkish President Recep Tayyip Erdogan also harshly criticized the U.S.-led coalition forces for their lack of support in the fight against Daesh.

“What did they say at the very beginning [of the operation Euphrates Shield]? They had said, ‘we will support all kind of fight against Daesh terrorist organization.’ But now they have disappeared. On the contrary, they are giving support to terrorist groups including the PYD/YPG and Daesh. It's very clear. We have confirmed evidence, with pictures, photos and videos,” Erdogan said during a speech in Ankara.

In addition to the Rumeylan airbase, the U.S. military had also established another military base near Harab Isik village, south of Ayn al-Arab, in March this year.

The air base in Rumeylan is big enough where cargo planes can easy land while the base in Harab Isik is only suitable for military helicopters.

PYD/PKK aimed to create an autonomous region from northeast Syrian city of Al-Hasakah to the northwest Syrian border with Turkish province of Hatay.

But Ankara announced that Turkey would not allow such a “terror corridor” across its southern border.