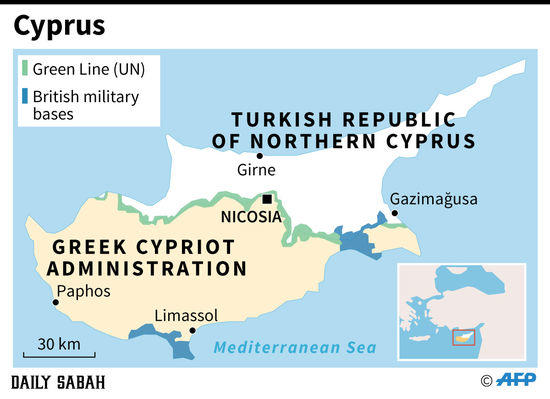 Top diplomats from Turkey, Britain and Greece joined U.N.-hosted talks on Thursday aiming to reunify long-divided Cyprus, as the negotiators tackle crucial security issues for the east Mediterranean island where tens of thousands of Turkish troops are stationed in the breakaway north.

Axar.az reports that, the arrival of Foreign Ministers Mevlüt Çavuşoğlu of Turkey, Boris Johnson of Britain and Nikos Kotzias of Greece means years of efforts to reunify Cyprus have reached high-level diplomacy, and are tackling security issues for the first time. Security is pivotal to any deal to end the 43-year split because it strikes at the heart of fears among both Turkish and Greek Cypriots.

The ministers were hoping to make progress that could pave the way for their prime ministers to join them, a possible signal that a wide-ranging accord also involving issues like governance, property and territory could be on tap. Britain is a former colonial overseer in Cyprus, and today operates two military bases on the island.

"If there is willingness by all side to find a commonly agreed solution regarding security... then the prime minister will travel to Geneva and we will have a chance to reach a just and viable solution to the Cyprus issue," Greek government spokesman Dimitris Tzanakopoulos told reporters in Athens, referring to Prime Minister Alexis Tsipras.

European Commission President Jean-Claude Juncker and U.N. Secretary-General Antonio Guterres were also participating in the talks. Guterres was expected to speak to reporters later on Thursday.

Greek Cypriots consider the presence of Turkish troops as a threat and an instrument of Ankara's influence on the island. They insist that Turkey, which is not a European Union member state, should neither keep troops on the island nor have the right to intervene militarily in Cyprus, which is part of the 28-country EU bloc.