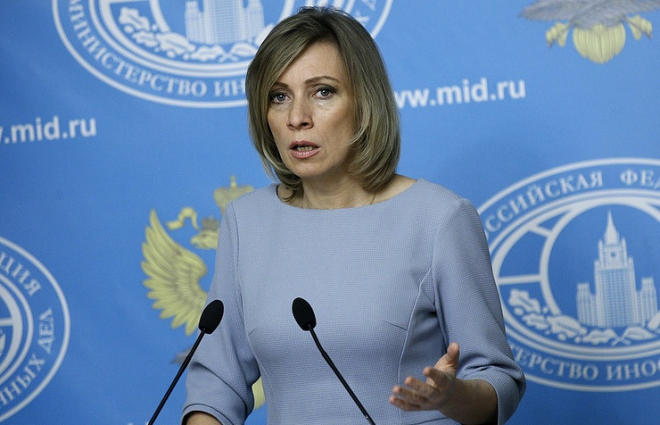 The Russian Foreign Ministry’s spokeswoman Maria Zakharova called an "information whirligig" the attempts of German media to reiterate the story of a Russian girl Liza, living in Germany.

Axar.az reports that, on Facebook, the Russian diplomat said the intentions to claim Russia’s interference with the elections in Germany similar to the accusations from the U.S. media against Moscow.

"Similarly to the "Trump dossier," spun by the U.S. media (CNN and BuzzFeed), now the German media have revived ‘the Liza case’. And then, official Berlin will say Moscow is interfering with the elections. (This) is called "information whirligig"," she wrote.
On Tuesday, CNN reported citing some US officials that senior intelligence officials had handed a dossier of classified documents over to Trump "to demonstrate that Russia had compiled information potentially harmful to both political parties, but only released information damaging to Hillary Clinton and Democrats." Some media said that the allegations came from a dossier compiled by a former officer of the British intelligence service MI6 Christopher Steele. Besides, BuzzFeed published on the Internet all the 35 pages of the "dossier," which turned out to be faked. Donald Trump denounced this topic as "fake news" and "a total political witch hunt".

Russia’s Channel One narrated the story of teen-age girl Lisa, 13, in January 2016. The broadcaster quoted the girl’s relatives as saying she had been reportedly raped by migrants. The German police confirmed that the girl had been listed missing for one day. She resurfaced 30 hours later. The official police report said the investigators found no evidence of abduction or rape.
The case sparked public outrage. According to rumors circulating in social networks the German police were not taking proper legal measures. The law enforcers replied they would not tolerate groundless charges of inactivity. The German media accused the Russian side in manipulations with the public opinion in Germany. The "Liza case" became a synonym to "Russian propaganda.".