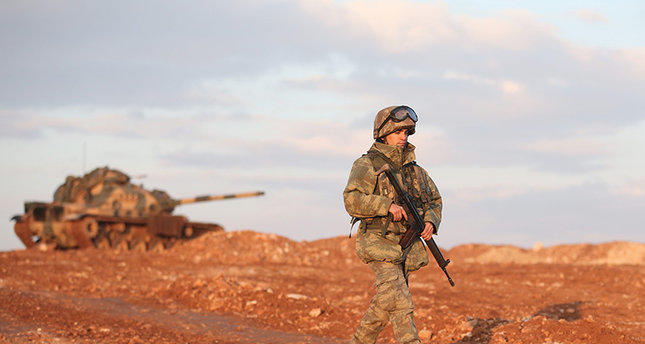 23 ISIS terrorists have been killed, 206 targets have been shelled by the Turkish military on the 156th day of Operation Euphrates Shield, the military said on Thursday.

According to the statement, Turkish shelling destroyed hideouts, defense positions, command control centers, weapons and vehicles used by the terrorists.

Meanwhile, Turkish jets carried out airstrikes against 24 ISIS positions in Bab, Bzagah, Tadif and Qabr al-Mukri districts, destroying 19 buildings, a cannonball, a maintenance workshop, a headquarter, ammunition depot and an observation post used by the terrorists.

Additionally, three bomb-laden vehicles have been destroyed, the military said.

Meanwhile, 60 improvised explosive devices (IEDs) were destroyed by explosive ordnance teams in a span of 24 hours, adding up to 3,209 since the beginning of the operation, while 55 mines were also detonated.