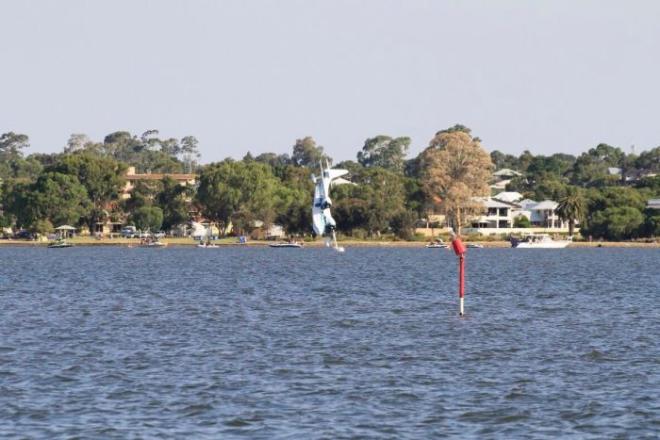 A man and woman are dead after a light plane crashed into the Swan River in Perth during Australia Day celebrations, prompting the cancellation of Perth's Skyworks show which was expected to attract 300,000 people.

Water Police confirmed the plane, a Grumman G-73 Mallard flying boat, crashed into the water about 5:00pm on Thursday evening.

They said two people, the pilot and an occupant, died in the incident. They were the only people on board.

Crowds had gathered on the foreshore in the lead up to the traditional fireworks display, and many boats on the water also rushed to the plane in a desperate bid to rescue those inside.

Onlookers said the plane was following another aircraft south along the river before it banked, stalled and nosedived into the river, where it broke into two pieces.

Lloyd Douglas was on a nearby boat when the plane smashed into the water.

"As he banked left he seemed to go further to the left ... and lose forward momentum and lost altitude fairly quickly," Mr Douglas said."My concern was that he'd landed in amongst all the small boats up at the east end of the Perth water ... it did hit the water with a fairly decent force."

He said there were people climbing over the wings of the plane, shortly after it crashed, trying to extract the people inside.

Mr Douglas said it took several minutes for people to reach the plane, and it was nearby revellers who were first able to get to it.