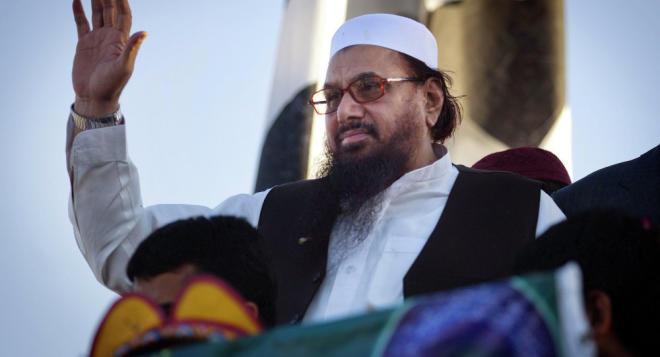 Claiming the ‘house arrest’ of Jamat-ud-Dawa chief, Hafiz Saeed by Pakistan as a futile exercise, India has conveyed it needs credible actions against these terror groups to restore faith in Pakistan’s actions.

Axar.az reports that, "We have noted that Hafiz Saeed and four others have been placed under preventive detention. India has long maintained that the United Nations Security Council 1267 provisions pertaining to listing and proscription of known terrorist entities and individuals must be effectively and sincerely enforced by all member states. We have also consistently called for bringing known terrorists under the ambit of the 1267 sanctions," Ministry of External Affairs Spokesperson Vikas Swarup told media on Tuesday.
Vikas Swrup further said that, "We have seen reports on the Pakistan Ministry of Interior order placing the Jamat-ud-Dawa and the Falah-e-Insaniyet Foundation under the WATCH

list and also the Falah-e-Insaniyet Foundation has been included in the second schedule of their anti terror legislation under United Nations Security Council Resolution No 1267."

India has termed Pakistan's actions against Hafiz Saeed and inclusion of Jamat-ud-Dawa and the Falah-e-Insaniyet Foundation on the watch list as mere eyewash.

"Exercises such as yesterday's orders against Hafiz Saeed and others have been carried out by Pakistan in the past also. Only a credible crack down on the masterminds of the Mumbai terrorist attack and terrorist organizations involved in cross border terrorism would be proof of Pakistan's sincerity," MEA Spokesperson Vikas Swarup further added.

Earlier, Pakistan put the mastermind of the Mumbai terror attack and founder of terror outfit Lashkar-e-Taiba and chief of Jamat-ud-Dawa, Hafiz Saeed under houses arrest due to India's consistent pressure.