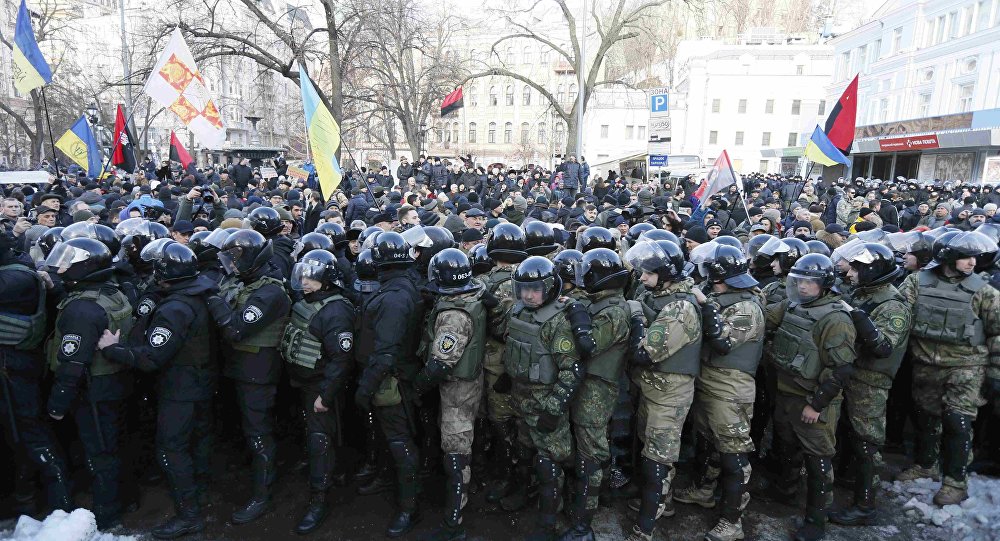 Scuffles broke out on Sunday in central Kiev after a mob tried to pitch tents outside the presidential office, demanding a freeze on trade with self-proclaimed Donbass republics, local media reported.

Axar.az reports that, veterans of the Ukrainian military operation to reclaim eastern territories cut off railway connection with parts of Lugansk and Donetsk regions last month, calling coal deliveries from these areas illegal. This led to electricity shortages.
Dozens of Ukrainian nationalists, including two lawmakers from the Self-Reliance party, marched on the presidential administration today to demand an end of what they perceive as coal smuggling, the Hromadske TV reported.

The angry mob, some of them wearing masks and carrying bats, ran into hundreds of riot police officers who blocked off government buildings. Clashes erupted when protesters hurled a firecracker at the police and sprayed them with a fire extinguisher.

Head of the self-proclaimed Donetsk People's Republic (DPR) Alexander Zakharchenko said Thursday that Donbass would cope with the blockade organized by Ukrainian radicals, whereas for Kiev, the consequences would be serious, as in two weeks Kiev "can forget about heating and energy industry."