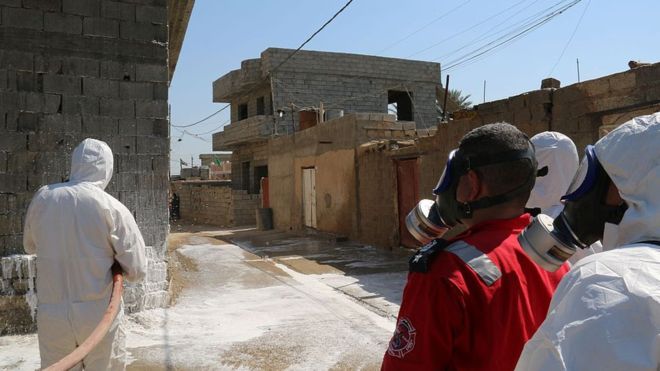 Twelve civilians have been injured in Mosul in what appears to be the first chemical weapon attack in the battle for the IS stronghold.

Axar.az reports that, a doctor from the International Red Cross (ICRC), based in nearby Irbil, confirmed the incident to the BBC.

An 11-year-old boy has severe respiratory and skin problems and a month-old baby was also injured.
The ICRC doctor said the substance used was still unknown, but it was being treated as a chemical attack.
The injuries were apparently caused in two separate incidents when mortar fire hit houses in east Mosul and victims complained of a foul smelling chemical.

The victims' symptoms suggested exposure to a "blistering chemical agent", ICRC Middle East director Robert Mardini said. They included blisters, redness in the eyes, irritation, vomiting and coughing.
The use of chemical weapons is forbidden under international law, he added.

It is not yet known who is to blame for the attack, but the mortars were apparently fired from west Mosul - which is still held by so-called Islamic State (IS).

​IS have long been suspected of making and using crude chemical weapons in territory it controls in Iraq and neighbouring Syria.
The World Health Organization said it was aware of the case and was working with the ICRC to prepare for further cases.