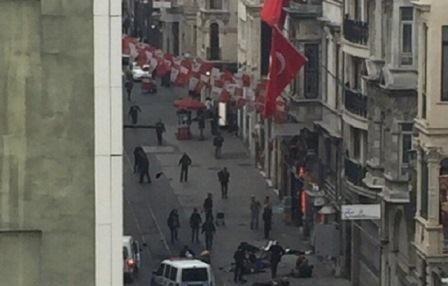 The explosion took place at the Balo Street crossing near the Demirören Mall located in Istanbul's top shopping and entertainment district.

Istanbul governor Vasif Shahin said that, 4 dead and 20 injured as a result of the blast.

The suicide bomber reportedly blew himself up and died at the scene.

Blast killed at least two people and injured at least ten according to initial information.

Ambulances were rushing to the scene of the explosion on Saturday morning.

The suicide bomber reportedly blew himself up and died at the scene. It is not clear whether the bomber intended to detonate the bomb at the location of the incident or whether it exploded by accident.

Several ambulances were dispatched to the scene, while police units cordonned-off the area.