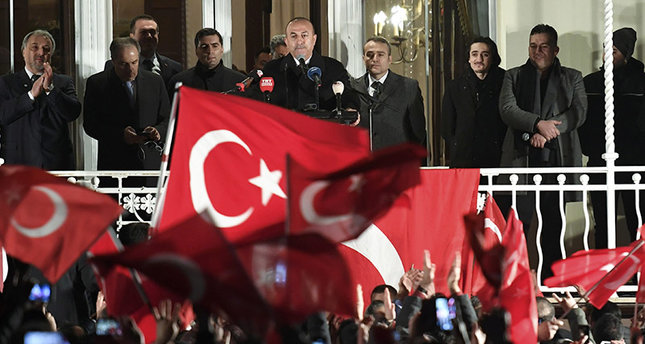 Foreign Minister Mevlut Chavushoghlu accused German authorities on Tuesday of systematically preventing Turkish officials from campaigning while addressing the Turkish community at the residence of the Turkish Consulate General in the northern German city of Hamburg.

Axar.az reports that as three of the foreign minister's previous meetings had been canceled or relocated, Chavushoghlu stated that Germany hinders Turkish officials' scheduled meetings by closing premises as a way to exert pressure on Turkish citizens.

Chavushoghlu said that Turkey has always considered Germany a friendly nation, but underlined that the country's anti-Turkey sentiment and the pressure it has exerted on Turkish citizens were not reflecting this relationship.

"Preventions cannot keep us apart," Chavushoghlu told the audience as he called on Germany to change its attitude.

The foreign minister also reminded that Turkey took it as a principle not to interfere in another country's domestic policy, stating that any politician from Germany could come to Turkey to meet with German citizens, as this would be the necessity of democracy.

Chavushoghlu said that Turkey never spoke out against Germany to Turkish citizens living there, instead always stressed that their integration in Germany was of great importance.

The foreign minister also raised concerns about growing racism in Europe and added that he would meet with his German counterpart Sigmar Gabriel on Wednesday to discuss this matter.

German local authorities have been canceling the public appearances of Turkish ministers and government officials campaigning ahead of the April 16 referendum in several German towns and cities, based on poor excuses such as the inadequacy of parking lots and security concerns.