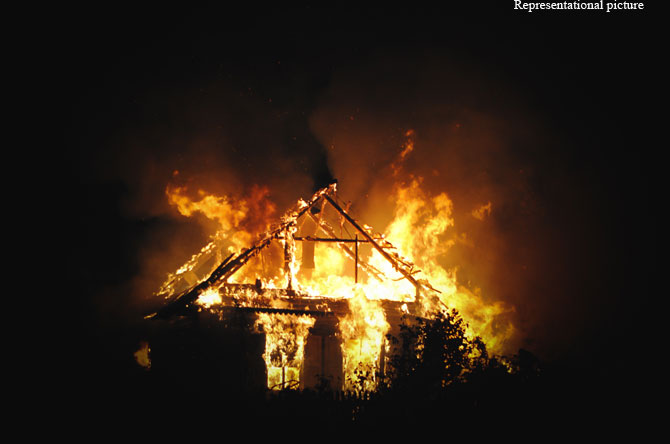 In a rather creepy incident, a 28-year old daughter 'grinned and laughed' after setting her own house on fire and leaving her father to burn to death inside in UK.

The woman Emma Sadler, is accused of deliberately starting a fire under the stairs as her father, Robert, aged 59, slept upstairs.
The incident came to light after a passing motorist saw smoke coming from Sadler's home and informed the police.

Robert was pulled out of the house by firefighters, but was pronounced dead while Emma slipped out of a window after starting the blaze in the the end-of-terrace home in Cardiff. The motorist told the cops that Emma was carrying a candle inside a glass vase and had a lighter.

Emma was arrested but the police alerted the doctors after witnessing her mental condition. According to doctors, Emma said that her name was '701'.

During her trial at Cardiff Crown Court, Emma denied single charge of manslaughter by reason of insanity. Emma has been detained since the incident and is in the hospital receiving psychiatric treatment. She is not even attending court and is instead watching proceedings via video-link.

Rouch said 'In the middle of the night Emma Sadler deliberately and intentionally started a fire in a small cupboard under the stairs of the ground floor. The fire took hold and generated a lot of smoke. Emma Sadler escaped from the smoke filled house while her father died of smoke inhalation.'

It was also revealed that a day before the fire Emma had been taken home by the police as she was found in an agitated state in a nearby street. Despite the ambulance being called, she wasn't attended by doctors till next day which was just three hours before she started the fire.

Emma told one officer while waiting to be assessed by a doctor at hospital, "I know what you are doing. You all want to rape me and kill me and take my body parts. Get my body sorted and get me out of here." She later stated that she started the fire with paper and a lighter and when asked why she replied, "The land is cursed."