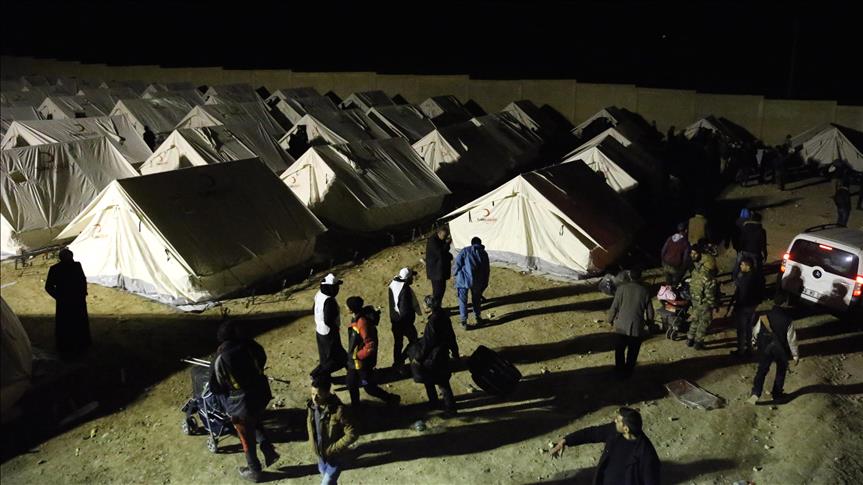 The first group of opposition fighters and civilians evacuees from Homs, reached a tent city in Jarabulus late Sunday.

A convoy of 32 buses carrying 1,354 evacuees from Waer arrived in the norther city, the last opposition-held district in Homs, after a 12-hour journey, according to an Anadolu Agency correspondent at the scene.

AFAD, Turkey’s disaster and emergency management presidency’s provincial director of Gaziantep, Sinan Atakan, told the Turkish news agency, it established a city of 230 tents for 306 families on a field in Jarablus.

Atakan said AFAD has also pitched 100 more tents in the region in case other Syrian families arrive. "We have completed all our preparations for the families. There are beds and blankets in the tents,” he said. "Furthermore, our health care stuff are vaccinating the kids. The wounded and ill people have been dispatched to the hospitals."

The evacuation was conducted under a Russian-backed deal between the opposition and the Syrian government to transfer opposition fighters to Idlib or opposition-held districts in Aleppo’s northern countryside.

Waer district has been under a siege for years by regime forces of Syrian President Bashar al-Assad.

More than 20,000 people have applied to leave the district under the deal, which was concluded March 13.

Regime and Russian forces will be responsible for the safety of the evacuees from Waer. A Russian military contingent will also be deployed in the district to supervise the implementation of the agreement.

The Turkish Red Crescent and other Turkish groups will be responsible for the care of the evacuees in Aleppo’s northern countryside and Idlib.

Since Syria’s civil war erupted in 2011, more than 250,000 people have been killed, according to the UN. The Syrian Center for Policy Research puts the death toll at more than 470,000.

The war has also displaced nearly half of the population.